Retired Forth dog trainer, Rita Lynd, fights back the tears as she walks around the altered grounds at Hannah’s House. “It’s going to be a dog’s paradise,” Mrs Lynd said “I made a promise to Hannah (who died in 2012), and I made her a promise to set up a place so that dogs like her would have a lovely home to live in and be cared for as they should,” she said wiping away the tears she could not stop.

This week has been an emotional time as the years of fundraising finally pay off. “I hate garage sales with a vengeance after how many we have held,” Mrs Lynd said. But it was all worth it. She remembers the distressed state the orphaned brindle boxer named Hannah was in when she was found next to her owner’s body. Hannah was there for days and did not want to leave his side. Mrs Lynd knew Hannah’s owner, John, and his late wife, Lesley. What happened to Hannah and her uncertain future at the time, was too much for Mrs Lynd. It brought home how many dogs had nowhere to go and got treated as chattels of the deceased estate. Mrs Lynd started the not-for-profit Hannah Foundation eight years ago to give those beloved pets somewhere to live out their natural lives. A will bequest is made to arrange it. It’s believed to be the only dog sanctuary of its kind in Australia, where owners can leave instructions on how to care for dogs and list the dog’s likes and dislikes to minimize the trauma on them. In Hannah’s case, the loyal, sad-eyed boxer was so traumatized it took a long time to regain her health in the loving care of Rita, who took her in for almost three years. Hannah’s memory is felt by everyone at 1 Hillwood Rise, Spreyton, which is a peaceful place for a dog sanctuary.

Hannah’s House officially opens on February 20 before the public open day is held on Saturday, February 23, to share the vision and thank the people who helped. Volunteers are still busy spreading mulch on garden beds, fixing fences and putting signs up ahead of the big opening day. It has been a long journey and while so many people contributed a small pool of about six people did most of the hard yards all the way through to raise the $300,000 that was required. “It’s just amazing to open the doors,” Mrs Lynd said. Her determination meant she would not have given up, but she did not know it would take as long as it has. At times it tested the dedication and resolve of even the most dedicated to the cause. “You can’t put a time on these things, and we’re here now,” Mrs Lynd said smiling. One of the first to come on board after reading about Hannah’s plight in The Advocate nine years ago, was Ulverstone lawyer Lee Edwards. His expertise was invaluable in setting up the foundation. “What would we do without our Lee? He has been wonderful,” Mrs Lynd said. “This property is owned outright by the Hannah Foundation Inc. which holds the title deed.

“Probably our biggest fundraiser a few years ago was at the Forth Hall – a big Italian long table dinner. Mrs Lynd’s daughter Vonda Mason who operates the Tasmanian Food and Wine Conservatory helped with the dinner, as did the Pizzerani family who opened a Cucina in Devonport. Asked how she kept on going, especially when she could see the dollar target was getting bigger rather than smaller, Mrs Lynd said she had no other option. Promise Kept: Rita made a promise to Hannah to provide a sanctuary where orphaned dogs can live out their lives. “I had to honour that promise I made to Hannah,” Mrs Lynd said. “The most significant barrier of the whole lot was the inflation of property prices. “I thought once we got to $180,000 we would probably be able to find a place…as we raised the funds property costs kept going up at a higher percentage than money coming in. “We have an awful lot to thank the previous owners for – when we made an offer they received a higher one, but the almighty dollar did not govern them they wanted the Hannah Foundation here, and without that, we would not be here.”

One of the biggest jobs was to remove a lot of big trees but there was no money left, and it was going to cost thousands. “Somebody told me to ring a tree faller at Port Sorell called Bruce Brown, and when he arrived he had a dog in the car, and I thought that was a good start,” Mrs Lynd said. “When he let his dog out of the car it was a boxer precisely the same colour as Hannah. “I fought back the tears like you have no idea, and he thought this woman is an idiot, but it was a sign from Hannah above I’m quite sure.”This wonderful man organized with the Rouses at Paradise to come to take all the trees out and cart them away at a far reduced cost.“People like that have helped us all the way along.“A lovely lady from Ulverstone donated the shed and John the handyman came and did jobs.”We had to get the shed floor poured, and Regor Concrete Pumping in Burnie offered help along with Martin Concrete in Burnie.“Every time we think we have no way to get something done somehow it happens. “Our lovely neighbours Monica and Rodney came over with an excavator to pull logs up from the bank.“He has been here numerous times to widen our driveway, work on the car park and put in walking tracks. He never takes a cent for any of it.” Once all the new plantings go in and the rest of the seats it will be a parkland designed for dogs with tracks around the property and a few obstacles. A bridge over the little creek is going in soon.

“We are ready to take in dogs,” Mrs Lynd said.”Dogs have been registered to come to us, and we get the dog’s profile ahead of time, so we know what the routine is.”The sanctuary needs a double garage, but it will have to wait for funds or another generous benefactor. “We have boundary fences to complete, and a pile of rubbish has to go, and we’re always short of volunteers,” Mrs Lynd said. “We just want to thank absolutely everybody that helped; every kindness matters.”The new caretaker is Mary Broughton who comes with her own resident dog, Lucy, a friendly chocolate labrador.”I feel privileged to be part of a team that has done so much and certainly has a lot to be proud about,” Mrs Broughton said. “We wanted someone kind and compassionate to older animals who need special care and that’s not frightened of a bit of work,” Mrs Lynd said. Numerous people had applied for the job.

Hannah’s House will never rehome or foster a dog out that comes to live here. The philosophy of the sanctuary is for the dogs to be well looked after and loved for life. Mrs Lynd wipes away more tears and scolds herself for crying again. “I’m a sook,” she said. “Hannah’s journey as sad as it was for her has opened the door for other dogs to live a wonderful happy life again, once they recover from the loss of their masters.”Hannah’s House officially opens on February 20. The public is invited to an Open Home at 1 Hillwood Rise, Spreyton on February 23, from 11 am until 3 pm. 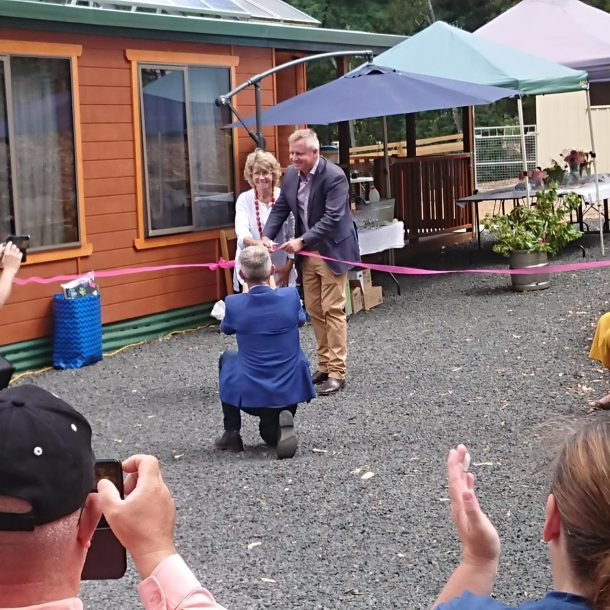 Hannahs Story
Life at the Sanctuary
Provisions for your Dog
Contact